Guided walk and history quiz ”In the Footsteps of Queen Sophie”

The history quiz, “In the Footsteps of Queen Sophie”, is a self guided walk at 1,5 km in the city centre of Nykøbing, based on the story of Queen Sophie and Nykøbing Castle. At the marked points on the map, you can read historical facts and answer some related questions. The correct answers can be found at the bottom of this page.
The history quiz is developed by Birgitt Bjerre, the Nykøbing Falster Tourist Association.
You can collect a folder with the quiz and guide at the Turist Office in Nykøbing, or you can read og download it below.
DOWNLOAD >>

See Nykøbing Slot in a 3D-animation:

Queen Sophie and Nykøbing Castle
Once upon a time, for approx. 200 years there was a large castle in Nykøbing Falster. The castle was as large as the castle Kronborg in Helsingør in the North of Denmark. Unfortunately, the castle was demolished in 1767 and everything was sold for reuses and recycling. Small parts of the castle can still be found around the city.
For almost 40 years, Dowager Queen Sophie lived in the castle, until her death in 1631. At 15 years of age she left her mother and father in Güstrow south of Rostock in Germany and married the 38-year-old Danish King Frederik II. She became queen and they had seven children. When her eldest son was crowned King, she moved to Nykøbing Falster and was granted the castle as well as Lolland-Falster as her estate. She ruled the estate and its citizens with an iron fist and became very wealthy in the process. 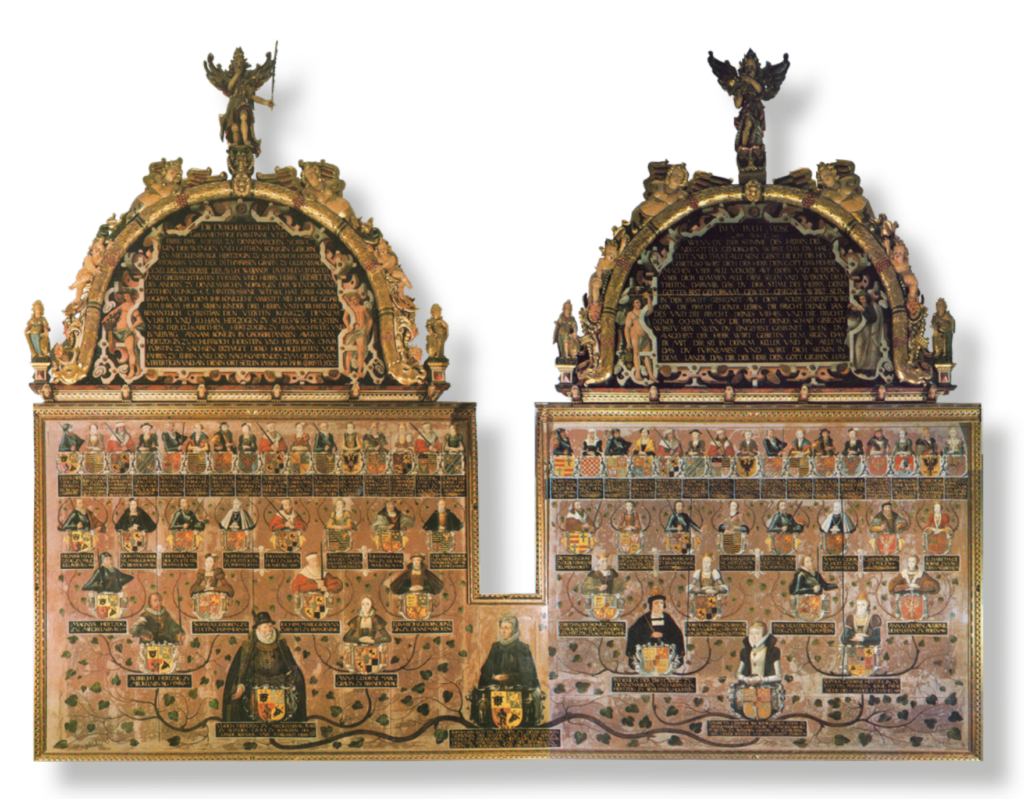 This Mecklenburgish tablet sized 33m2 from 1627 was painted by Antonius Clement. It shows Queen Sophie’s ancestors for five generations. It was donated along with the alter tablet to the church by Dowager Queen Sophie.

The tour begins at Slotsbryggen at the ruin of Nykøbing Castle 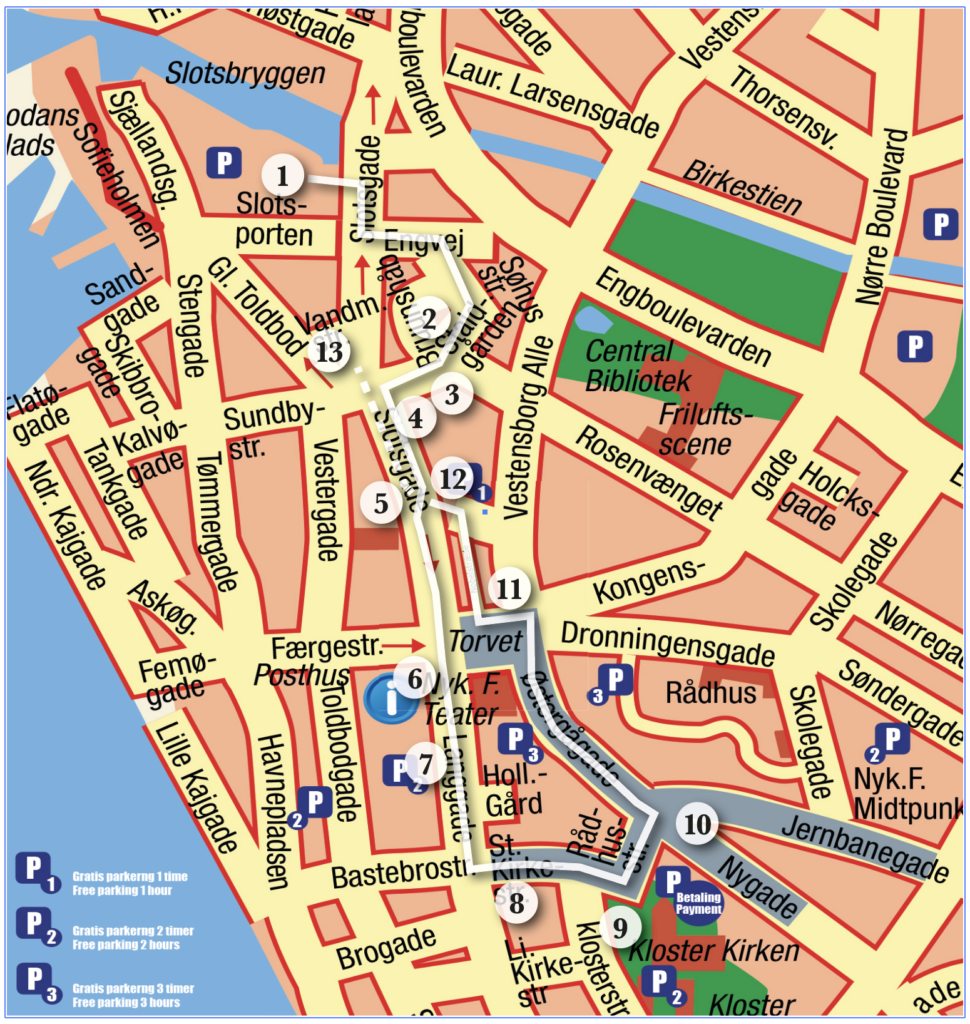 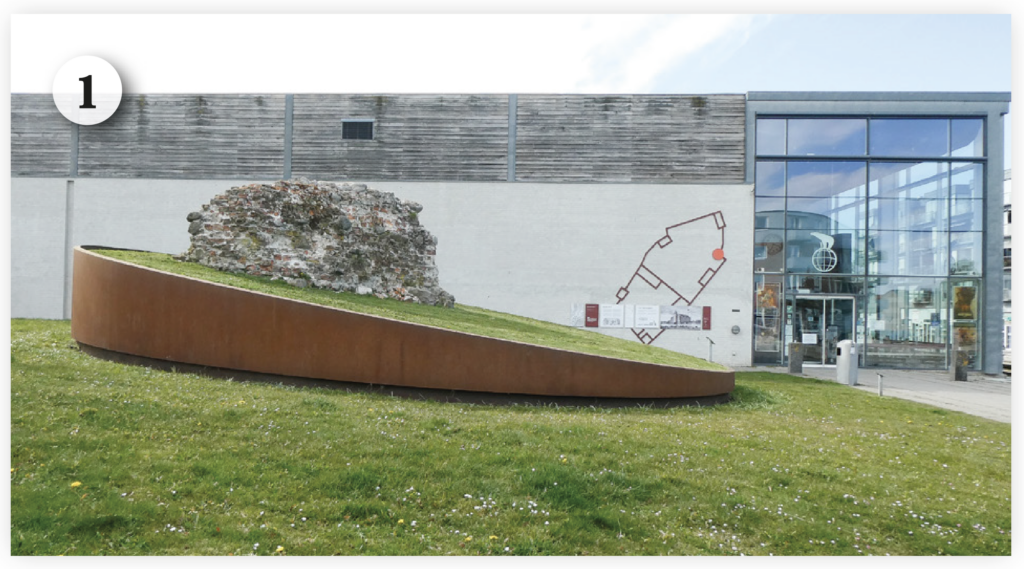 Sophies eldest son was crowned King at the age of 11. He often borrowed money from his mother to spend it on wars against Sweden and to build beautiful buildings like the stock exchange building Børsen, and the Kronborg, Frederiksborg and Rosenborg castles. He and others also “borrowed” good Nykøbing wine of Queen Sophie’s, which is now known as the Rosenborg Wine. The wine is still this day served, though watered down, to the guests of royal New Year’s buffet of the current Queen Margrethe in Copenhagen.
Quiz
A. Sophie’s oldest son was king until 1648. What was his name?
See the right answer >>
B. What is the name of the tower, shown on the drawing of the castle, at the red dot? (Shown on the mural at the cinema)
See the right answer >>
Keep walking along Slotsgade to 6 Engvej. Turn right into the stable courtyard. 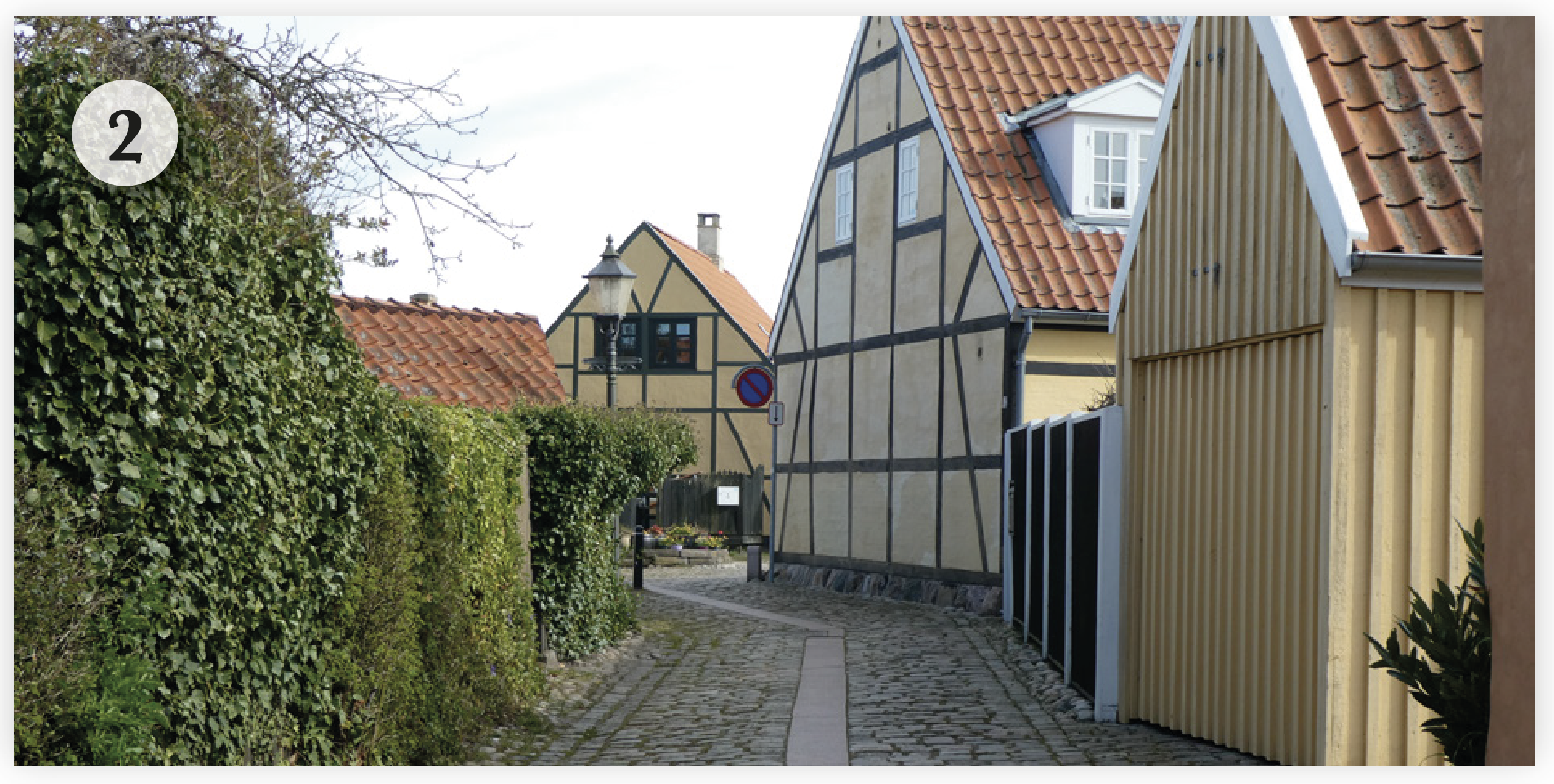 The royal stables was built in 1630 by the Heir Apparent, Prince Christian, son of Christian IV, and grandson of Queen Sophie. The stable building is the only remaining structure that formed part of the castle. Only the southern part of the building is the original. The front on Rosenvænget was shortened in ca. 1820.
Quiz
A. The heir apparent was never crowned. Why?
1) He travelled overseas,
2) He died before his father,
3) He had a civil marriage?
See the right answer >>
B. There is a relic of the Second World War on the adjacent property. What is it?
See the right answer >>
Go to 30 Slotsgade.

On the corner lies the castle’s grain silo, constructed in 1750 with an exit to the stable courtyard which at the time was the only entrance to the Stable Courtyard Quarter. The building is today owned by Finn Arnesen, an artist in the Finnermann gallery.
Quiz
A. Who lived in the little house by the columns in Rosenvænget?
1) The fisherman
2) The maintenance man
3) The porter
See the right answer >>
B. What is written at the top of the sign inside the port?
See the right answer >>
Continue down Slotsgade. Stop between numbers 15 and 17. Here is a plaque that shows the boundary of the castle grounds at the time of Queen Sophie.

The Latin school stood here from 1807 and became a police yard in 1953. Many famous Danes attended this school, including the priest and poet Kaj Munk and a famous adventurer in Greenland whose father was a shopkeeper in Frisegade.
Quiz
A. What was the name of the famous adventurer?
See the right answer >>
B. What does it say at the top of the sign at the entrance to the police yard?
See the right answer >>
Continue down Slotsgade to Færgestræde, which leads to the harbour. This is where the ferry to Lolland landed until 1867.

The House of the Tsar was previously known as The Crooked Corner. It was an inn where travellers could stay before they continued over to Lolland. Tsar Peter the Great was served a meal here in 1716, wherefrom the name originates. A museum and a tourist information centre are located on Færgestræde.
Quiz
A. Queen Margrethe and Prins Henrik visited this place in 1989 for the city’s anniversary. Which one?
1) 500th
2) 600th
3) 700th ?
See the right answer >>
B. What does it say on the metal sign above the windows?
See the right answer >>
Continue down Langgade to number 18.

The oldest house in town, from the end of the 16th century. Built as a mansion and still timbered. Here resided the castle mason Trap, who maintained the castle for ten years until it was demolished.
Quiz
A. In what year was the castle demolished?
See the right answer >>
B. How many angels can be seen on the beam under the first floor?
See the right answer >>
Stop in front of Langgade 24 and view Hollands Gård with the earlier water tower from 1908, where you from the top have a beautiful view over the city and the Sound. Continue along Langgade to Frisegade 2. Have a look to the right down the Bastebrostræde with the old houses and the view to Lolland. Then turn left to the corner of Store Kirkestræde where you can see the Captains Yard.

The Captains Yard was founded in 1620 as a timber structure in two stories. Captain Friis owned the yard in the 1830s, wherefrom the name originates. In the building today lies an exciting pub with a maritime theme.
Quiz
A. What is the name of the pub?
See the right answer >>
B. How many faces can be seen on the wooden beam that separates the stories?
See the right answer >>
Continue along Store Kirkestræde to Klosterkirken (Abbed church) 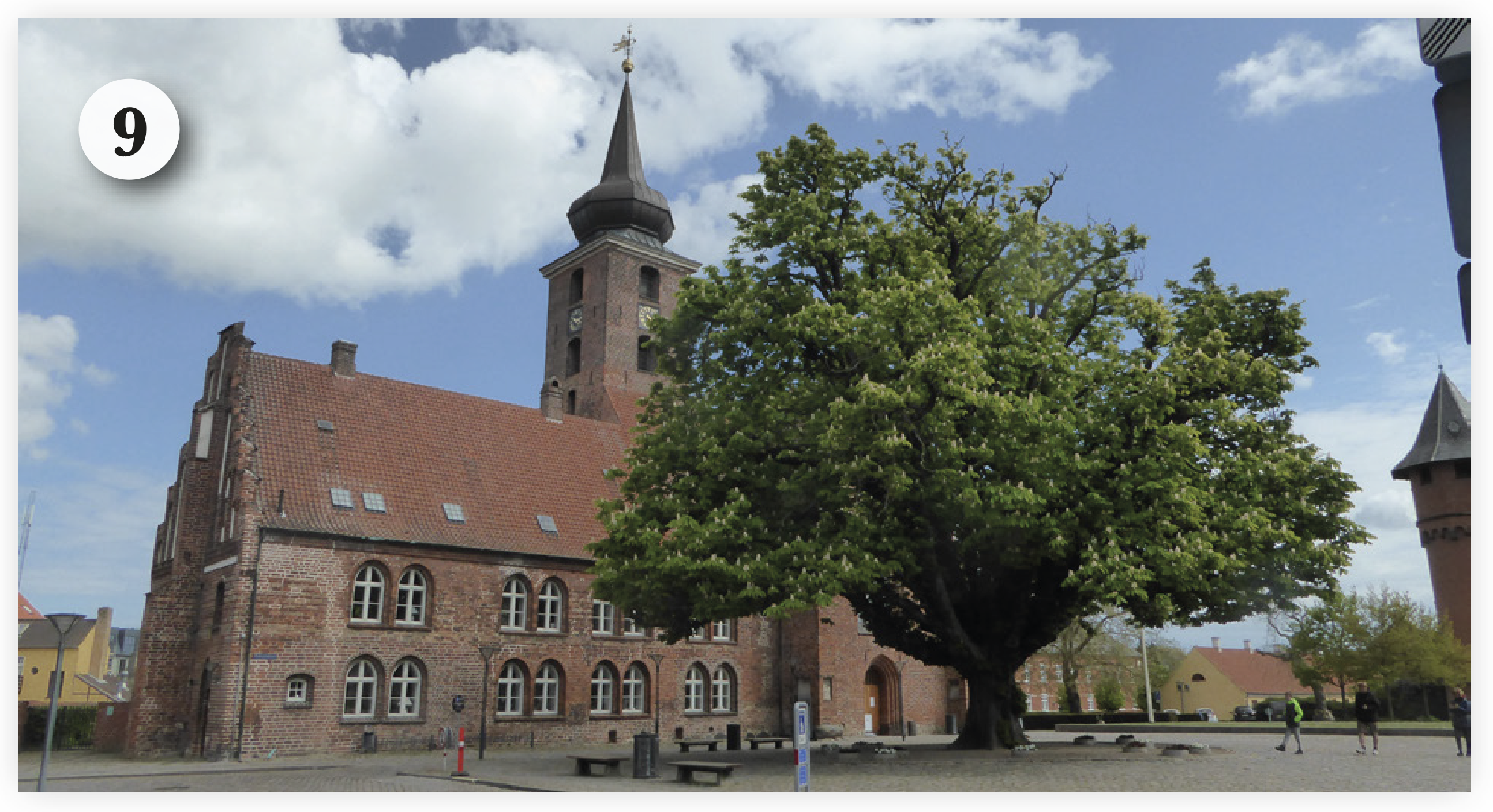 Klosterkirken was built in 1419. The church was a part of a Franciscan cloister until 1512, when it became a parish church. Within the church lay also the latin school and the town hall. In the 1700th century Queen Dowager Sophie sponsored the altarpiece and the large family tree showing her ancestors in Mecklenburg.
Quiz
A. How many generations are shown in the family tree?
See the right answer >>
B. There is a tower built in 1890 by Klosterstræde to the right of the church. What was it used for?
1) Sentry Tower,
2) Lookout tower,
3) Water tower
See the right answer >>
Walk down Rådhusstræde to the little square (Lilletorv).

On the little square lies the castle gardener’s residence. It was adjacent to the castle gardens which lay behind Jernbanegade and Østergade. The door in the building’s right side originates in the 18th century from Nykøbing Castle. The street was previously known as Gartnerstræde and led to the city’s moat (Voldgade).
Quiz
A. What is the name of the street today?
See the right answer >>
B. On the headboard sit golden birds. What are they?
See the right answer >>
Continue down Østergade to the Town Square (Torvet). Stop and answer Quiz 11 by the Nykøbing Theatre, famous for its revues. Nykøbing Falster is also called Revykøbing for this reason.

The town square also lay in the centre of the town in Queen Sophie’s time. For centuries, there have been markets several times a week here. Towards Slotsgade across from the House of the Tsar, lies Bjørnebrønden, a granite sculpture by Mogens Bøggild inspired by the Russian bear, erected at the city anniversary in 1939.
Quiz
A. What is the name of the little lane before the theatre with names in the tiles?
See the right answer >>
B. How many stone figures stand in this little lane?
See the right answer >>
Walk across the square and continue down Nobelstræde to the Grønttorvet. The master barber Brodthagen and his two sons resided here. Holger became the mayor, and Viggo an actor and theatre director for the famous Nykøbing Falster Revue.

Grønttorvet (the vegetable square) was previously known as Grisetorvet (the pig square). Previously livestock was traded here. From here is a beautiful view of one of the large shop marketplaces, that was previously very influential on the city’s developments as a trading town.
Quiz
A. When was this building in Slotsgade built (shown at the top)?
See the right answer >>
B. On Grønttorvet, number 22 Slotsgade, lies a restaurant. What is its name?
See the right answer >>
Continue to Sundbystræde and stop at Vandmøllepladsen by the Historiegade sign.

Vandmøllepladsen (the water mill square) was named after the castle’s water mill that once stood here. The sculpture, shaped like a mill wheel, has a number of years chiselled into the granite. The years refer to events in Nykøbing Castle’s history, which can be seen on the Historiegade sign.
Quiz
A. In what year did Dowager Queen Sophie move into the castle?
See the right answer >>
B. What castle on North Zealand is the same size as Nykøbing Castle?
See the right answer >>
Here ends the tour “In the Footsteps of Queen Sophie.”
Sources: www.nykobingfalster.dk/historiequiz